Is it time to return to the world of blogging? I have been encouraging my Mom to create a blog, so should lead by example, right?
Posted by Marcy at 6:49 AM No comments:

I think I need to join a support group...is there a goalie hockey mom support group??? If so, I need it! I need to learn how to deal with the stress of the game, how to feel excited about shoot-outs, and how to accept it when the other team members are at the opposite end of the ice from the goalie AND the puck!

Tonight was the first game of the Fall Clinic playoffs. Alexander is on the yellow team and we played the blue team. We played the blue team who we walloped last week. Do you think it was the same type of game? Absolutely not! They were on their game with a fill-in goalie from another team. They we aggressive, they worked as a team, and the game ended up with a shoot out.

Really, what made it all worth it were their BIG smiles in the locker room. They had all worked together and won 7 to 6. What a game!!! Now, if only I can find that support group because I'm not sure I can last through another shoot out! :)
Posted by Marcy at 8:04 PM 2 comments:

Another State Park geocache find today. This time, we headed south to the Mankato area to Minneopa State Park. It is a gorgeous park with two cool features: a waterfall and an old mill. I don't have time to write more, but here are some pictures:


The bridge over the falls which were only a trickle of water today. 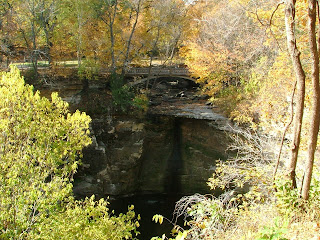 The picnic area with the beautiful trees and lighting. There were several, separate groups having photo sessions nearby - a perfect day to take holiday pictures! 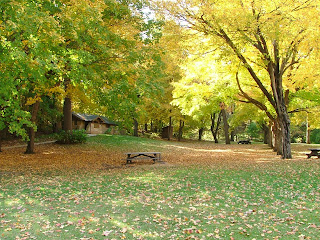 The old mill with Alexander and Ethan next to it. 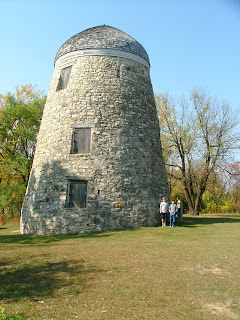 Picture of E and A on a cool rock. Will this be the Christmas card picture??? 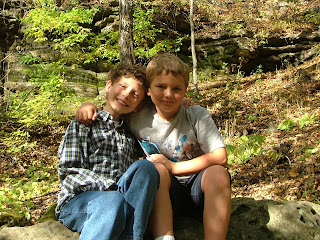 Me and my boys on a rock near the falls. 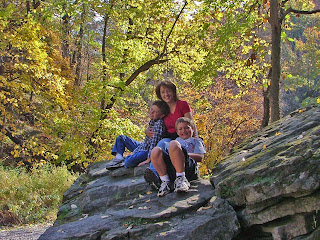 The Quest for In Yan Teopa Rock

Yesterday started out as a typical geocaching adventure to Frontenac State Park. However, the cache was super easy to find, so we decided to continue our adventure and hike some trails. 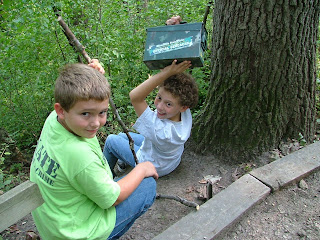 The trail that we were on, forked and we decided to continue on Trail A to quest for the river valley and In Yan Teopa rock. The river bottom was very cool with lots of interesting textures, tree roots, and even bones. We saw fish bones and the bones of a medium-sized mammal. I took lots of pictures of the interesting swirls in the trees. This is one of my favorites with the texture of the rock next to a worn tree root: 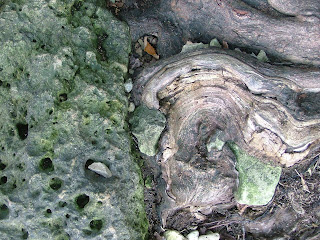 The trail to the river valley bottom/shoreline was a one way path and would have required significant backtracking, so we made the call to hike the 0.3 miles up the shoreline to the next path from the river bottom back up to our trail. We thought it was a safe decision since the mood of the boys seemed exuberant and full of adventure like this picture of Ethan captures: 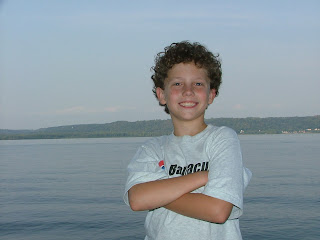 However, that it might not have been the wisest decision. The walking was not easy and the boys started to get very grumpy. The path back up to Trail A was not the easiest and compounded the grumpiness as evidenced in this photo: 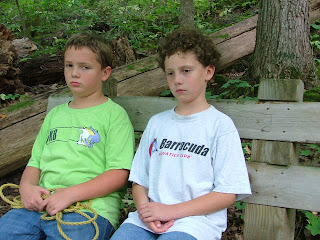 Note: Alexander did find a cool rope along the shoreline!

Remember, our goal was to make it to In Yan Teopa rock which was another .7 miles away. We were all hot and sweaty and the boys were super grumpy (as demonstrated above). The distance doesn't sound like much, but the terrain was difficult and the ups and downs on the bluff made it really tough. Before we could see the rock, we had to climb out of the river valley and up the bluff. It had at least 5 switchbacks which means it was steep, long, and tiring!!!! By the time we were nearing the top, all of us were saying, "This rock better be worth it." At one point during a quick rest, I looked at a big rock near us and said, "That better not be the damn rock" and Alexander replied with "Where's the damn rock?" Ooops!! LOL!!! Well, the rock was worth it. I was leading the line, turned on a switch back and gasped. This is what we saw: 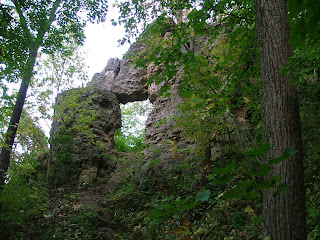 The first day of 2nd and 5th grade were a success for Alexander and Ethan, respectively. Alexander really enjoyed Amigo, the multi-age learning classroom that Ethan just graduated from. He professed that it is MUCH better than Kindergarten or 1st grade! As a 5th grader, Ethan has to do a service project all year. He was selected to be a crossing guard.

Here are the boys! 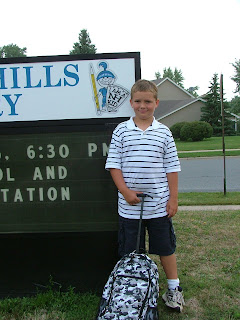 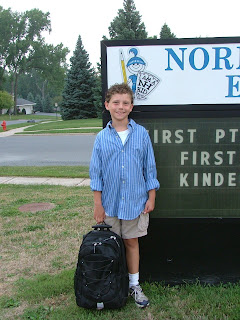 Here is a VERY serious crossing guard who wouldn't even acknowledge his mother as she crossed his crossing area! 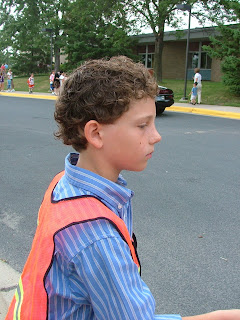 Yes, hard to believe, but we have a new obsession: geocaching! Check out www.geocaching.com; our username is make_mn. It all started last weekend at Sibley State Park when Kirsti's husband, Mike, taught us how to geocache! The state park program caches include coupons for 40% off of handheld gps. We got our last week and have now visited 23 caches in 3 days. Our legs are exhausted and we all have scratches to prove that there is some work behind it.

Only one cache today, but it was a great find because it had our first Travel Bug in it! We were at Fort Snelling State Park for an end of summer picnic, a swim, and a multi-cache search. The TB has been logged as found and now we need to drop it off at another cache at a state park that it hasn't visited yet! Where should we go????

Here are the boys with the travel bug from the Fort Snelling cache: 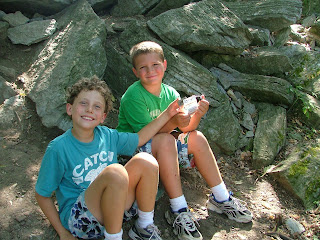 I have taken several more pictures of finds and will post them when I get a chance. Of course, I still need to upload pics from the State Fair, but it is time to get ready for the first day of school tomorrow!
Posted by Marcy at 7:32 PM No comments:

In our family, birthday celebrations are NOT a one day event. It started years ago when I couldn't understand why my YOUNGER sister's birthday came before mine. She is a Feb baby and I am a March baby. It just didn't make sense to me. So, instead of arguing with a very persistent 5 year old, my parents would give me a small gift BEFORE her birthday so that I wasn't put out by her birthday event.

Needless to say, the tradition of celebrating more than one day has continued with my boys. This month, it is Ethan's turn. We had the family birthday celebration last week with a trip to the Star Wars exhibit at the Sci Museum (I still need to post those pics) and then the traditional birthday pie! This weekend, we had the celebration with friends: Connor, Nick, Owen, and Alexander.

We started the day at the Grand Rios waterpark. The boys had a ton of fun. I heard that one of the boys went on the hurricane 10 times! I tried it once and that was enough for me. I have now tried that type of slide at the Kalahari and at the Grand Rios. I am firm in my knowledge that I do not care for that type!

Here are the boys showing off their muscles in the hot tub . After this shot and after we explained the rules and assigned buddies, it was nearly impossible to keep up with them to take pics. They spent hours on the lazy river and climbing the stairs to the slides. 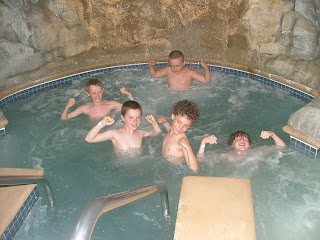 After only a couple of hours, they were STARVING. I believe that they are all in growing mode - that tends to happen when you are 9 and 10!!! They managed to keep themselves entertained, though for about 4 hours until we headed home. Luckily, we had a few cookies leftover in the car from the ride up, so we were able to stave off hunger until our next stop - WHITE CASTLE.

White Castle has also become a birthday tradition. We don't let the kids eat it, so it has become something special and they look forward to it.

The boys spent both the ride to the waterpark and back making up songs, so it was only fitting that I captured them singing under the White Castle sign. Ethan really likes the Ramones, so we listened to a couple of their songs on the drive. Here they are singing "white, white, white, white castle" to the tune of ???? (will have to edit later - I am not the Ramone fan in the family). 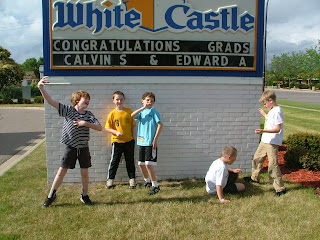 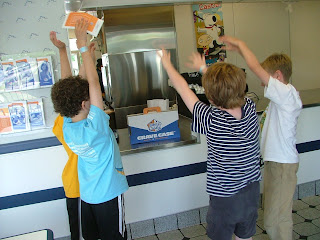 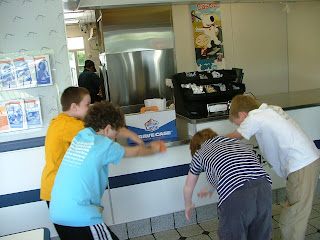 Once home, the entire crave case was DEVOURED. 5 boys 30 burgers in under 10 minutes. Lord help us when they are 15!!! We will need to get the crave CRATE of 100 burgers! 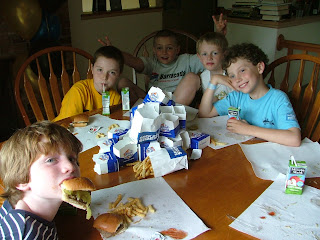 Next we opened presents - always fun! One of the cards included some pop rocks. We HAD to open them immediately and give them a try. I love Ethan's face in this pic as they are popping on his tongue. 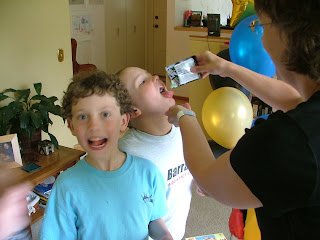 Ahhh...cake. Ethan chose a DQ ice cream cake for his celebration. When we went to order it, the manager told us that we could have any blizzard flavor that we wanted. He immediately chose Mint Oreo. Alexander hates mint, so he started to cry. While I was explaining that it was E's birthday and he got to chose and that I could get him a different treat, the manager offered to make it half regular Oreo and half mint! It worked out great because half of the kids wanted mint and the other half didn't! 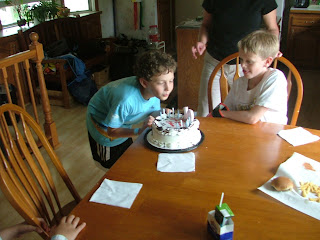 Marcy
I am a blogger who loves to scrapbook, dabble in photography, and spend time with my family. By day I am an Oracle Applications Project Manager/Business Analyst. I love my work, but I wish it didn't get in the way of my crafting and family time!